I don't feel I have much to add to the discussion. I'm sure my gamer and even my science credentials are questionable and I feel like an imposter speaking out at all, but actually, that just proves the point! So to Anita Sarkeesian, Felicia Day and all the other amazing women who are fighting for our rights out there on the internet. Thank you! I am here too!

The years start coming and they don't stop coming 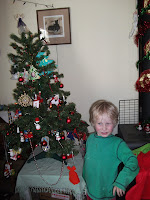 So this is Christmas.... What have I done? It's been a busy year but none of it is recorded here. I'm sad today, but overall feeling positive about the future. I think it might be time to start looking outward again which is kind of why I'm posting here and not on LJ, home of roleplaying and introspection.

Parenting is still my major focus. J and T are happy and reasonably secure. They have an amazing relationship with each other (most times), good relationships with both their parents and with lots of other people. I think they like themselves. I see this as a major achievement.

I'm halfway to my stats qualification... 'Graduate Diploma of Applied Statistics'. This year I got a B- and an A- for my third years stats papers (Biostatistics and Quality Improvement). Not too bad, given that the rest of life kept happening. I also took a couple of extra maths papers as background, which didn't go so well (D for Linear Maths and C+ for Calculus) I'm predicting I'll be under review at work by July, but hopeful I'll survive there long enough to complete my diploma and maybe do some consulting jobs to get some experience. If not, I think my skills may now be provably transferrable enough to get a job even in the current market. I am pretty competent. This job has developed my work-social skills enormously.

Roleplaying has continued to make me happy this year... Regular wonderful Wednesday gaming... some LARPing (highlights this year were Jenni's Silver Kiss and Shell Beach, and Sophie's amazing steampunk Mad Goddess LARP), Day of Games, My game So Cold in Alaska winning a prize at Kapcon... and constructive play test with awesome gamers for White Rabbit, next year's offering.

Also I have lovely friends... If any of you are reading this, you should know that I think I am extremely lucky that so many intelligent, creative, kind, talented, beautiful people consider me worth spending time with... Yes, I am looking at you! Happy holidays to everyone in my village... You bring me hope and inspiration! :)

I recently found Big Think, and at the moment it's my favourite site to visit when I have a few minutes to fill with something awesome. I love watching the videos of smart people (sadly, mostly smart guys) talking about things they are passionate about, and sometimes it's useful or affirming, like this one, where Tal Ben-Shahar, a psych lecturer from Harvard, talks about Five Ways to Become Happier Today...

As I was watching this, I realised that I'm already doing some of this stuff... I'm getting better at separating out and naming my negative emotions instead of trying unsuccessfully to pretend that they don't exist. It's far easier to mitigate loneliness, money worries and fear that I can't cope, for example, than an un-named and dreadful turmoil pressing in on my mind. And not-so-strangely, I really am much happier...

... And I exercise most days, for at least half an hour and I do Jenni's TiLT and I do try to make sure that, at the end of the day, I spend some time really appreciating being with my boys, cuddling and reading and talking and making sure that they go to sleep knowing I adore them... which has the fabulous side effect of making me feel adored too!

And thinking about all that I was reminded of this... 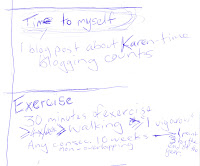 ...which arose out of a conversation with my friend A, after he visited from the UK 18 months ago (just after I changed jobs) and came on holiday with me and the boys. I think it's fair to say that he was pretty worried about me at the time... He compared my situation to a incident on an aeroplane where I should put on my oxygen mask before helping the kids with theirs. I didn't (and don't) believe things were catastrophic, or my behaviour was life-threatening, but he made some pretty accurate observations about my mental state and some recommendations for weekly goals, which I wrote down (there were some other goals too... getting divorced and moving to Wellington, but they aren't relevant here). I started exercising more regularly and by the middle of last year had begun habitually exceeding 30 minutes/day. I don't always manage the requisite dose of 15 minutes of Karen time (which has to involve intellectual activity... ideally something that would make me say "Hmmmm"... A assumed a Thinker pose as he explained this) 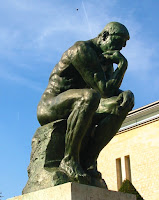 But, realising that A is right, and that thinking about cool and interesting things does make me happier, I am going to try and generate a new habit. 'Dr Bunny hops and hops and hops and...' started as a blog about learning to cope as a single parent, but when I lost my job and during my divorce it became a blog of failures and self-indulgent whining about bad choices.

I haven't felt comfortable here in recent months. I've even been considering starting a new blog, but I think I should 'own' my bad times as well as my good ones! So, instead, I am going to reclaim this one and try and establish a new habit. In the spirit of 'history has expired due to inactivity' (which has expired due to inactivity, but some people may remember), I will don my oxygen mask, seek out and blog about at least two things each week that I think are cool or interesting or thought-provoking. Let's see how it goes...
Posted by Karen at 7:44 PM 2 comments:

I find it harder to stay motivated in winter and I've been a bit lonely and sad lately, so I've been spending more time trawling for inspiration or meaning or something... Apparently this could be a symptom of depression! But anyway, here's some cool stuff, mostly science to help keep you going through the dark and cold...

First up, some good news in the fight against climate change apathy and denial... A Dutch enquiry and a British review have both confirmed what we already knew, that the science behind the IPCC report was sound. Now hopefully we can put our effort into doing something about it?!

Symphony of Science is a project that is putting the wonderful words of some of the world's greatest science communicators to music. My favourite is 'Our Place in the Cosmos', but the others are really worth listening to... the vids are amazing too!

I found this via Clear Science which gives nice simple explanations of scientific concepts and phenomena, with some history of science thrown in... and I got to that from Fake Science which never fails to make me giggle (thanks

Depleted cranium is a skeptical blog that exposes bad science. It usually gives me something to think about.

exiledinpn affirmed my world view by sending me this article about how the science career path is broken. I think I should expand on this at some stage... I think, for example that it is still more broken for women than men... but I'm encouraged by Carol Greider and Elizabeth Blackburn winning the Nobel prize in Physiology or Medicine last year for discovering the structure of telomeres (the caps on the end of chromosomes)... and tonight is not a night for grizzling!

It isn't science but I want Andrea Bocelli to come and sing beautiful bedtime lullabies at my house!


I'm waiting for the earthquake I just felt to appear on geonet so I can see how big it was. I'm enjoying putting numbers on things at the moment, so size mattters :-) Yup... here it is, really close and I've put in my tuppence worth :-)

This Short Sharp Science blog entry links to the incredible chromoscope... view the universe in gamma rays, then check out the European Space Agency's annotated map. Next stop the Galactic Centre on our way to a winter holiday in the Aquila Rift...

But because we're not there yet, here's a beautiful reminder from Carl Sagan that this incredible Pale Blue Dot is the only home that you or I will ever know.

Still breathing, as an elderly colleague of mine used to say... until, one day, he stopped...

I have been a bit flat today, following a slightly imperfect MAF audit yesterday, but I have been having some pretty happy days lately too...

In spring even Palmy is fairyland

The pink blossom avenue in the Esplanade is like a fairy tale place and we have purple hyacinths, creamy freesias, red and pink and purple and white anemones, purple pansies, purple and white and yellow violas, hot pink dianthus, 3 yellow and orange daffodils and a red and yellow tulip in the pots on our deck. Tiny pale green leaves are starting to appear on the trees... Today was cold, but the sky was blue and the sun was bright... So many colours... No wonder T's favourite song is "I can sing a rainbow!"
Posted by Karen at 8:39 PM No comments:

This evening I ran 3.1 km in 25 minutes (apart from walking across one busy road), then when the kids were in bed I made myself a healthy dinner of awesome deliciousness... medium rare steak in a wholemeal wrap with hummus, mesclun, tomato, cucumber and chickpea salad (+ pumpkin, sundried tomatoes, mint and coriander from the garden, lemon juice and madras paste)...

... On Saturday I swam 750m and cycled 5 km (though not consecutively)... And on Sunday I rode my bike 9-and-a-bit km (which is d**n close to 10 km)... even mamnaged to go down some gentle slopes without my feet in the ground, and only feeling slightly shaky (well, quite shaky really, but I stayed on and kept going)...

I am so totally going to do this triathlon! (It is 6 months away, so really quite a reasonable goal)

(I copied some of this across from facebook and it has made the formatting go psycho but I am too knackered to fix it now)
Posted by Karen at 9:15 PM 1 comment: 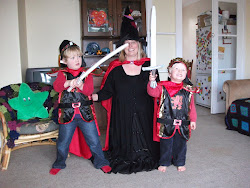 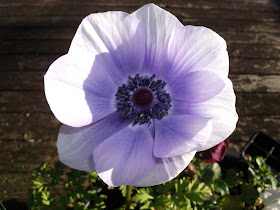